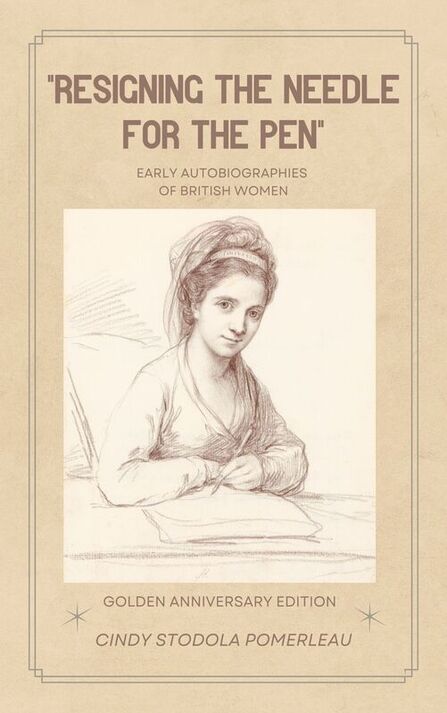 "RESIGNING THE NEEDLE FOR THE PEN"
​
This book is the Golden Anniversary edition of my 1974 study of early autobiographical writings of  British women. The title is derived from a frequently-used metaphor involving the competing claims of a signature women's tool and a more gender-neutral implement of self-expression.

The book started life as my doctoral dissertation at the University of Pennsylvania The topic-was almost completely uncharted territory at the time, and despite its humble beginnings, it eventually developed a bit of a cult following. It has now been downloaded hundreds of times from the Penn Libraries Scholarly Commons.

Nearly fifty years later, through the miracle of indie publishing, I am able to provide the convenience and portability of a paperback version at a modest price. Watch for it later in 2023.

To the Moon and Back:
Essays on the Life and Times of Project Diana

On January 10, 1946, the US Army successfully bounced radio waves off the moon--the first-ever extraterrestrial communication, the birth of radar astronomy, and the opening salvo in the Cold War. The author was just shy of three years old at the time, and her father, E. King Stodola, was Scientific Director of the team that carried out the experiment, code-named Project Diana.

To mark the 75th anniversary of this historic event, Cindy Stodola Pomerleau has written a series of essays using Project Diana as a lens for examining the transformations and dislocations occurring in the US during World War II and its aftermath. Nearly half the book is devoted to World War II, with particular attention to the history of radar at Camp Evans, starting with its fumbling beginnings at Pearl Harbor and culminating in its stunning success in Project Diana. The second section is devoted to King Stodola himself and an examination of the confluence of internal and external factors that made him the right man for the moment. The last section provides a sampler of Jersey Shore life (e.g., the boardwalk, the Neptune Music Circus), contemporary American life (e.g., Sears, nylon stockings), and the author's little-girl activities (e.g., her parakeet Archie, her Islander ukulele).

Steeped in good humor and nostalgia, these wide-ranging narratives explore Project Diana's historical, sociological, political, and scientific context, as seen from the perspective of the tiny coastal New Jersey community where fate in the form of Camp Evans deposited the author's parents and their neighbors. The book is a unique eye-witness account of an event and an era that marked a turning point in American history.